In June 2003, Dawn Csutoros was invited by Virginia Young of the Wilderness Society, to work on an art piece which would involve members of the community and help raise awareness of the plight of the endangered Styx Forest — the Valley of the Giants in southern Tasmania.

Dawn created and developed the idea of a large scale knitted installation, Tree Hugs, which was to join the exhibition Barking up the Wrong Tree touring to  Mori Gallery, Sydney, Spacement Gallery, Melbourne and the Carnegie Gallery, Tasmania. Her concept was essentially to create a powerful art installation while simultaneously enabling everyone and anyone in the community to actively participate in the creation of a statement reflecting their love, care and willingness to protect the beauty of the Styx forest from further old growth logging. 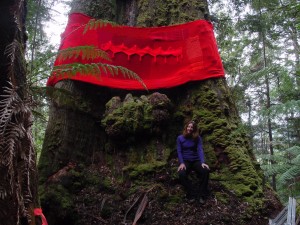 People throughout the community knitted red wool into pieces as short or as long as they personally had time and ability to produce, which would later  be sewn together into hugs  and  wrapped around the trees in the Styx Forest.

Dawn envisaged a line of red hugs through the panorama of the Styx Forest — a line of protection, a line of defence, a line reflecting the community’s consistent concern over old growth logging in the Styx.  A hug is one of the most natural ways in which humans show their care for one another and was a playful way of interpreting tree hugging.  The colour red speaks of many things — passion, love, care, no, stop… 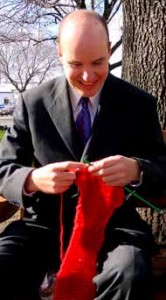 The act of knitting is an intimate one,

embedded in our cultural heritage as a display of love and care. We knit for someone special.  It’s also something anyone, young or old, male or female, could engage in either privately or with others.  Throughout history, knitting had been a way for those on the home front to aid loved ones on the battlefront. This nature of this project  also allowed the frail, the bedridden and the elderly, who, unable physically to join the barricades were able to actively contribute to the debate.

Over a three month period, knit-in events were organised and people across Tasmania and around the world were seen knitting. The Wilderness Society organised knitting at its stall at Salamanca Market each Saturday.  The Republic Hotel in North Hobart hosted a knit-in, and the pub was filled with red wool and knitters of all ages listening to poets, environmental speakers and local bands.  School students, teachers, retirement home members, patients in hospital were knitting for the cause.  People knitted everywhere, in pubs, in cafes, at the soccer.  Like Chinese whispers the news spread  to all corners of the world. 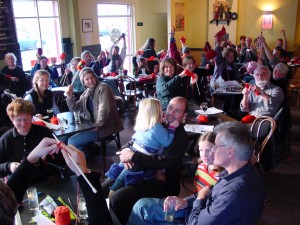 Finally, the knitted segments were received from all around Tasmania, Melbourne, Sydney and the Blue Mountains, Queensland, Fitzroy Crossing in the North West Kimberleys, Adelaide, Perth and Canberra, from  people as young as four and as old as ninety two.  Richard, a technician at the Theatre Royal, knitted his way through 15 m

etres and gave up smoking at the same time!  Hugs from the UK, Brazil, Canada, Scotland, Fiji and the USA.

In October, over 800 pieces, 115 square metres in all, filled the room at the Victoria Centre in central Hobart. Csutoros positioned the pieces and along with the aid of many volunteers and many hours, the pieces were sewn together into tree hugs.  A week later they were ready for installation in the  Styx forest.

The first stage of the installation wrapped a large 18m hug around Gandalf’s Staff, a magnificent 400-year-old 84m high Eucalyptus regnans.  A number of other trees were also wrapped in this same area of Styx wilderness destined for logging, and the public were invited to visit and view the installation in situ.
The second stage was the creation of the red line installed in an area of old growth forest at the edge of a clear fell.  Over four days with the aid of eight willing volunteers, four ladders and lots of patience the panorama of hugs was complete — a line of protection, a red line of defence. 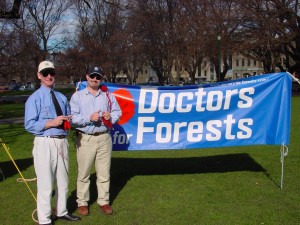 Camping overnight in the clearfell, Csutoros filmed the knitted installation over a period of 19 hours to capture the shifting light from morning to night.  Using time-lapse techniques it was condensed into a 12-minute video.

The tree hugs were part of the national touring exhibition Barking up the Wrong Tree which opened in Mori Gallery, Sydney, followed by Spacement Gallery, Melbourne and Carnegie Gallery in Hobart.  Tree Hugs was subsequently exhibited as a large scale installation in the Royal Melbourne Hospital and also selected to be part of the Red Bull Music Academy exhibition in Melbourne, 2007.

Photography by Photographers for Forests